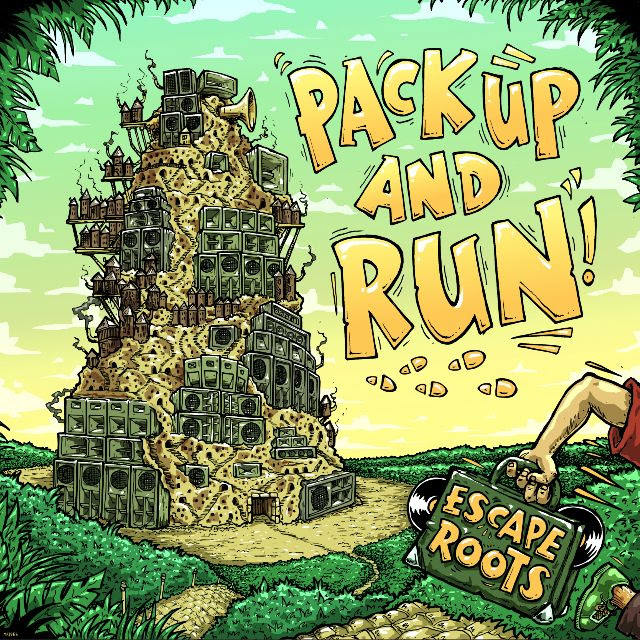 Pack Up And Run


UK dubwise reggae and dancehall featuring international vocalists. It's time to Pack Up And Run! Glaswegian producer Escape Roots has been steadily plying his trade crafting steady rocking dubwise riddims and remixes for artists such as Daddy Freddy and Parly B as well has holding down a residency at Mungo Hifi's legendary "Walk & Skank" weekly session, supporting a who's who of UK and international reggae all stars. Along with regular appearances at festivals such as Boomtown and Kelburn Garden party over the last few years, he has been building an arsenal of his own productions and killer dubplates. Always built for soundsystem, his production has grown and developed immensely over the last few years and the added dynamic of an amazing selection of vocalists really helps to deliver a deeper message. Kicking things off comes "One Step At A Time" featuring veteran Jamaican singer Black Warrior, then regular collaborator Tom Spirals steps up alongside sweet vocalist George Palmer for a wicked combination, having first met at International Dub Gathering in France 3 years ago. Unit 137 MC Jago then takes control of the mic, urging us to "Cool Down" with backing vocals from fellow sparring partner Deemas J, followed by Dark Angel aka Mowty Mahlyka who comes in strong with "Turn Ya Lights On" - a cautionary tale warning us to be wise to the corruption and confusion in the world. The 'Doncaster Raggamuffin" Parly B then blesses us with his trademark style and pattern on the heavy "Nah Get A Look In". Hempolics and The Drop frontman Dandelion is next with the massively popular "Ganja Socks", whilst Irish singjay Cian Finn takes things deep and brooding with his take on the traditional gospel song "Sweep Over My Soul" in a space dub style. Elsewhere rising Jamaican singer Skari and El Fata supply sweet vocals to "Feel Good" (previously heard on Scotch Bonnets "Puffers Delight" compilation) and "This Melody" before Russian soundboy Tenor Youthman leaves his trademark hill and gully rider style on "Dilemma" atop a classic riddim. Rounding things off is another Unit 137 cohort and long time friend Galak Spiritual for "Hold a Meditation", bringing his sweet singing style combined with a roughneck attack in the verses. Unifying an international line up of vocalists is no mean feat, but Escape Roots handles it with ease on this future classic slice of reggae and dancehall that runs tough not only in the dance, but is contemplative enough for repeated home listens too.