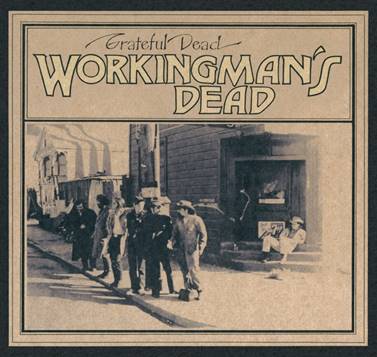 
On June 14, 1970, the Grateful Dead released Workingman’s Dead, an album that was unlike anything they had ever done, one that showed the world a new side of the Dead. It was clearly the same band as before, but now with a distinctly different sound and approach to the music, pivoting from psychedelic improvisation to folk-rock storytelling for the “everyman,” as the album’s title suggests. While the Dead’s first three studio albums appealed to many, the group didn’t yet have the mass breakthrough that would make the entire world take notice of this band of misfits from the Bay Area. Workingman’s Dead changed all that. With eight perfect songs – like “Casey Jones” and “High Time” – the album solidified the Jerry Garcia-Robert Hunter songwriting tandem as one of the best, and most-important, songwriting collaborations in music history. Garcia, Bob Weir, Ron “Pigpen” McKernan, Phil Lesh, Bill Kreutzmann and Mickey Hart recorded the album in about 10 days at Pacific High Recording Studio in San Francisco with Bob Matthews and Betty Cantor – the band’s live-sound engineers – as producers. Fifty years on, every song on Workingman’s Dead sounds fresh, alive, and new.