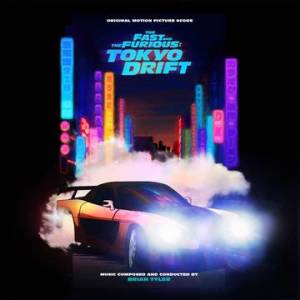 
The Fast and the Furious is the most successful movie franchise of all time, with almost 6.5 BILLION dollars in box office receipts from ten films over the past 20 years. Tokyo Drift is often sighted as the best of the lot, and the musical score is definitely one of the most lauded among score fans. Brian Tyler scored Tokyo Drift, (with an assist from Slash on "Welcome to Tokyo"), and went on to the score four of the five subsequent films. This album has never been available before on LP. The text only CD cover has been replaced with a new design based on Japanese manga art styles. This double disc will feature an orange LP for sides A and B, and a black vinyl record for sides C and D, with side D featuring a stencil of the scarab beetle design that appears on the car belonging to the Drift King.