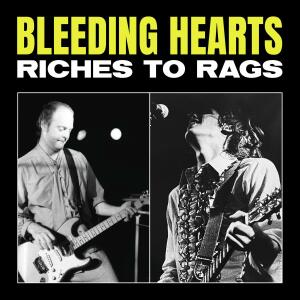 
Limited Addition Record Store Day LP on Red Vinyl. 2000 pressed worldwide. Bleeding Hearts’ Riches to Rags is a remarkably solid collection of rock ’n’ roll songs featuring the guitar work of Bob Stinson, founding member of the Replacements. Upon Stinson’s untimely death, this 1993 recording was shelved (not even a cassette was circulated) and remained the stuff of legend among Replacements fans. The album is upbeat, catchy Minneapolis rock, with hooks galore and Bob’s ever present bright chords shining through. This Record Store Day album is pressed on Red Vinyl with liner notes from Grammy Award Winning journalist Bob Mehr, who wrote the definitive biography Trouble Boys: The True Story of the Replacements. He describes Riches to Rags as “the final piece to the puzzle of Bob Stinson’s musical career”. The remaining members of Bleeding hearts plan to play shows to celebrate the release of Riches to Rags. Cover Photos by Dan Corrigan who took the iconic photo on the cover of The Replacements - Let It Be album. Track listing: 1 Riches To Rags 2 Gotta Find a Way 3 Imagination 4 Guilty 5 100 Ways 6 Gone 7 Tonight 8 Happy Yet 9 Poker Face 10 What Do You Want? 11 Know it All 12 Right as Rain 13 Something Never Comes