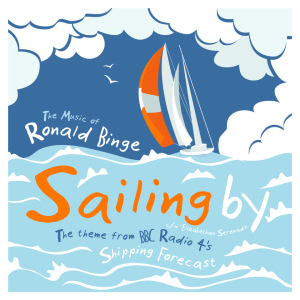 
"Coloured vinyl, numbered: Includes a map of the Shipping Forecast regions by artist Tabitha Mary- whose Shipping Forecast designs are Etsy best sellers!! British composer Ronald Binge dedicated his career to making ‘light music’ and yet his legacy is assured with these two tracks that have transcended the typical throwaway image the genre and have become classics in their own right. Notes: Sailing By is the music played every night at 12.46am on BBC Radio 4 to herald the reading of the late-night Shipping Forecast. This is the original version of Sailing By that the BBC use each evening, never-before released on vinyl! Sailing By was chosen by Jarvis Cocker as his final track (and the one he would take with him) on Desert Island Discs! This music, and the shipping forecast, are iconic British institutions. Artists to reference the shipping forecast in songs include Blur, Radiohead, Beck, Prodigy, Thomas Dolby, Tears For Fears, Manfred Mans Earth Band, and of course British Sea Power! Elizabethan Serenade is one of the most well known and loved pieces of ‘light music’ ever made. The piece won Binge an Ivor Novello Award and had chart success in Germany (recorded by the Günther Kallmann Choir) and South Africa, the work also had lyrics added in German, Czech, Norwegian, Swedish, Finnish, Dutch, Danish and French. In 1970, a reggae version, called ""Elizabethan Reggae"" by Boris Gardiner & the Love People, was released on Trojan Records and is one of that label’s most famous recordings! In 2012 Elizabethan Serenade featured in the Queen’s Jubilee Concert, and now the piece is considered as part of the UK’s national light classical repertoire. "